Reflections on Dante (i) 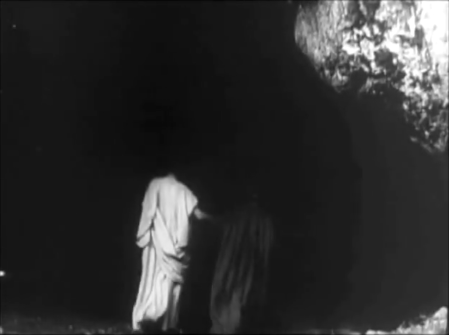 In the Eighth Canto of Dante’s Inferno he and Virgil arrive at the city of Dis. They must pass through the city to continue their journey, but its denizens won’t allow them to.[1] Virgil must leave Dante for a time to negotiate their passage, and Dante balks at being alone. Virgil assures him,

Fear not; because our passage none can take from us, it by Such is given. But here await me, and thy weary spirit comfort and nourish with a better hope; for in this nether world I will not leave thee. [2]

I have been in dark moods where I recalled this scene and related to Dante’s desperation and foreboding. He faces the prospect of being abandoned deep within hell, where he cannot possibly navigate or fend for himself. He doesn’t even belong there in the way that the damned do [3]; who knows what his fate would be if left alone? He can be forgiven for struggling to take his security on faith.

How can reassurance withstand bleak circumstances? Especially when the one who offers it is not themselves at risk.

So the sweet Guide and Father leaves me here, and I stay on in doubt with yes and no dividing all my heart to hope and fear. [4]

I once articulated my solidarity with Dante’s fears by misquoting Virgil’s seemingly hollow [5] assurances as though from Dante’s perspective: “in this nether world I will not leave.” [6]

I find myself returning to this scene at present, when I am actively working to be hopeful not for any particular outcome or degree of improvement, but unconditionally. Anything more specific is ripe to fail. My partner is fond of quoting the monk Ahjan Brahm saying the solution to life’s disappointments is to lower one’s expectations. [7] This appears defeatist, but harnessing this spirit can afford a powerful resiliency. Or at least I hope so. Perhaps naivete is required to weather great trials; otherwise one is Dante, who cannot be reassured even by a heaven-sent guide.

It is hard to press forward in an environment where despair and uncertainty are infinitely reasonable, especially when they stem from what exists while hope resides in what could exist or what is coming into existence. The way through such circumstances may necessarily lie in the unanticipated and seemingly impossible, which appear unreliable to say the least. Dante’s path forward took the form of the sudden appearance of a wrathful archangel. [8] I don’t expect my own resolutions to be so explicit, but I am not discounting reality’s ability to contort into unlikely shapes.

Such radical nimbleness is certainly one of the attributes of my musical self, and discovering vital phoenixes amid hopeless rubble is one of my core experiences in making art. This is where my creative practice starts to connect to my life; a root of its personal value.

It thus falls upon me to continue the journey in the face of apparent impasses, making space along the way for that which may facilitate passage without knowing what or when or if it will come. [9] [10] Even Virgil experienced uncertainty, [11] and I have no such explicit guide.

Indeed he lives, and thus alone Me it behoves to show him the dark valley; Necessity, and not delight, impels us. [12]

3. “Above the gates I saw more than a thousand spirits, rained from the Heavens, who angrily exclaimed: ‘Who is that, who, without death, goes through the kingdom of the dead?’” (Alighieri, D., The Divine Comedy (New York, 2013), trans. Carlyle, J.A. and Wicksteed, P.H.), 47.)

5. That is, seemingly hollow from the view of the endangered.

6. The object becomes the subject, as the object experiences itself the subject. A person seeking to resolve another’s fears so readily may actually hasten capitulating to them.

7. “But I always remember a little anecdote, that when I was going to Indonesia for one of the first times […] and I went to the airport, and as I turned up in the airport, there was a big sign saying, ‘Flight canceled.’ […] And I saw many people getting really angry […] They were banging the table. […] You know what I saw happen? All they got was very sore hands. The flight never turned up, they were just hurting themselves even more. […] One of the little tricks which we learn is actually how to not to [sic] raise your expectations, but to lower them. Lower your expectations and you’ll have a far happier life.” (Braham, A., Lower Your Expectations, 24 November 2017 https://www.youtube.com/watch?v=4qtxgvH_e1Y (5 May 2020).)

8. “Suddenly there broke on the dirty swell of the dark marsh a squall of terrible sound that sent a tremor through both shores of Hell; a sound as if two continents of air, one frigid and one scorching, clashed head on in a war of winds that stripped the forests bare, ripped off whole boughs and blew them helter-skelter along the range of dust it raised before it making the beasts and shepherds run for shelter.” (Alighieri, trans. Ciardi, 76-77.)

9. “Allegorically, this highly dramatic scene once more represents the limits of the power of Human Reason. There are occasions, Dante makes clear, in which only Divine Aid will suffice.” (Alighieri, trans. Ciardi, 79.)

10. “The possible has been tried and failed. Now it’s time to try the impossible.” – Sun Ra